Off Campus: via WEBEX

The negative thermal expansion nature of the graphite is more pronounced in the two-dimensional limit, so-called graphene. This exciting change - mainly attributed to the enhanced anharmonicity and quadratic behavior of the out-of-plane acoustic mode - is validated via both First-principles Quasiharmonic theory calculations and experimental measurements. However, the notable difference between the different experimental studies and quasi-harmonic theory is still unclear. On the other hand, the extend of negative thermal expansion of other honeycomb structures is also an interesting research subject. In this respect, we investigated the Thermal expansion behavior of two-dimensional nitrides and graphene by ab initio molecular dynamics simulations as well as a quasiharmonic approximation. We predicted that anharmonicity of the acoustic phonon modes is related to the unusual negative thermal expansion behavior of the nitrides. Our results also hint that direct ab initio MD simulations are a more elaborate method to investigate the thermal expansion behavior of 2D materials than the QHA. Nevertheless, we show that h-GaN and h-AlN possess giant NTE coefficients within the covered temperature range 100–600 K regardless of the chosen computational method. This unusual NTE of 2D nitrides is reasoned with the out-of-plane oscillations related to the rippling behavior of the monolayers.

In addition, we investigated graphene by using also highly accurate machine learning, Gaussian Approximation potentials. Further vibrational and structural analysis verify that the same conclusions can be deduced with density functional theory level in terms of the reasoning of the thermal expansion behavior and the negative thermal expansion behavior is associated with the long-range out of plane phonon vibrations. Thus, it is argued that the enabled larger system sizes by machine learning potentials may even enhance the accuracy compared to small size limited ab initio molecular dynamics. 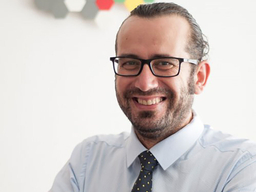